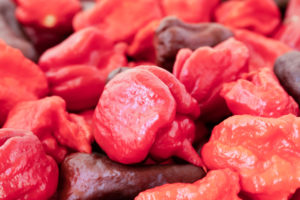 What Do Peppers, Tobacco, and Potatoes Have in Common? Potent Chemicals Called Alkaloids

Alkaloids are a type of chemical compound found in plants that often have strong physiological effects on humans. They evolved in plants as a defense mechanism against pests. Since alkaloids taste bad and can make animals sick, plants that contain them are less likely to be eaten by animals.

Alkaloids can be produced in response to bacteria, fungi, nematodes, insects, and other pests. In a study where potato plants were exposed to the Colorado Potato Beetle, exposed plants were found to have a higher concentration of alkaloids than unexposed plants. This trend is seen with most alkaloid-containing plants when exposed to a pest or another stressor. Though alkaloids are found in a wide array of plant families, there is a notable amount of alkaloid production in a family of plants called Solanaceae.

The family Solanaceae includes peppers, eggplants, tomatoes, and potatoes. These plants all contain alkaloids, with varying effects on humans.

Understanding the effects of these alkaloids is important, as these plants are frequently consumed by humans and other animals. These plants are economically important since they are used in medicine and agriculture. Alkaloids in plants from this family are used as pharmaceuticals, recreational drugs, and insecticides.

Nicotine, one of the most frequently consumed alkaloids, comes from this family of plants. The tobacco plant has been cultivated by humans for hundreds of years due to its nicotine content. This plant can be smoked and has historically been used as an insecticide and insect repellent.

Nicotine serves as a natural defense against fungi, bacteria, insects, and animal pests. It acts as a neurotoxin and is especially effective against insects. This alkaloid is found in large quantities in the tobacco plant. It is also found in lower concentrations in other species within Solanaceae, including potatoes, tomatoes, and peppers.

Nicotine is highly toxic to mammals. It also has a stimulant effect, which gives it potential as a recreational drug. It has long been thought that nicotine is a highly addictive compound, but research shows that the truth is a bit more convoluted. Much of the research of nicotine addiction in humans has been studied through smoking cigarettes, which contain a number of chemical compounds other than nicotine. Research suggests that in combination with these other chemicals, nicotine addiction is more likely to develop than if nicotine is consumed on its own. Other minor alkaloids that are found in tobacco such as anatabine, cotinine, and myosmine probably amplify the addictive nature of consuming tobacco.

A lesser-known alkaloid in this family of plants is called Solanine. It is found in potatoes, tomatoes, and eggplants. Solanine is poisonous to animals when consumed in high enough quantities. For humans, a lethal dose is between 2 and 5 milligrams of solanine per kilogram of body weight. Domestic animals can easily be poisoned when fed the leaves and stems of these plants.

Solanine can pose a threat to humans in the form of “greened” potatoes. When potatoes are stored improperly or exposed to too much light, the potatoes “green” and excess alkaloids are produced. It is evident that “greening” has occurred since it gives the potatoes an unpleasantly bitter taste. There are many historical cases of solanine poisoning in humans, especially during times of food shortages since people are more likely to eat “greened” potatoes despite the unpleasant taste. Solanine poisoning leads to vomiting, diarrhea, depression of the central nervous system, hallucinations, and even death. Minor cases of solanine poisoning are common and lead to temporary gastrointestinal issues that usually do not require medical treatment. To prevent “greening,” potatoes should be stored in a cool, dark place.

Solanine is an effective compound in discouraging pests and pathogens. In one study, solanine was shown to inhibit the growth of Alternaria solani, which is the fungal pathogen that causes a disease called early blight. It is likely that solanine can be used to fend off other pathogens.

Capsaicin is yet another alkaloid from this family of plants. It is the compound which causes the pungent and irritating effects of hot peppers. All of the chili peppers belong to a genus of plants called Capsicum. For most mammals, capsaicin acts as a strong chemical irritant, though birds seem to be unaffected by the irritating effects. This is suspected to be an evolutionary strategy by plants within Capsicum, as birds are the most effective distributors of their seeds. Wild capsicum peppers contain enough capsaicin to repel mice and rats, but feeding by birds is unaffected.

Capsaicin has a number of metabolic effects. It causes the adrenal gland to produce corticosteroids more rapidly and increases gastrointestinal secretions. Due to these effects, extracts from Capsicum fruits are used in some weight loss supplements. Capsicum extracts can also be used as a topical agent to reduce pain and inflammation resulting from injury or arthritis. Of course, these peppers are also often used as a spice to improve or alter the flavor of various foods.

Capsaicin also has a number of pharmacological uses. There is evidence that it slows the development of tumors and can, therefore, be researched as a method of treating or preventing cancer. This effect is due to its property of causing cellular apoptosis which can prevent a tumor from growing or moving to another area of the body. Capsaicin also has antimicrobial, antioxidant, and analgesic properties.

Though each of these alkaloids differs in structure and function, they all share basic alkaloid properties which makes them unattractive to pests and impactful to animal physiology. This information can be useful in the development of new insecticides. Insects cause a huge amount of damage to the agricultural crops that feed the human population. For example, around 20% of cereal crops are destroyed by insects every year. Insects also transmit disease to humans; malaria alone, which is transmitted to humans by mosquitoes, kills over 600,000 people every year. For these reasons, methods of controlling insect populations are constantly being developed and refined.

The alkaloids found in Solanaceae are a promising alternative to synthetic insecticides for a number of reasons. For one, alkaloids are found in potent concentrations in many plants within Solanaceae. Solanaceae contains many economically important plants, so these alkaloids can be obtained inexpensively and in high quantities.

Studying alkaloids is Solanaceae is a good place to start this researching these questions as there is a significant amount of alkaloid diversity within this family. A scientific understanding of these alkaloids is important and can open up new pathways within medicine and agriculture. Research on the alkaloids within Solanaceae will continue to produce new pharmaceuticals, insecticides, and further our understanding of these chemical compounds.